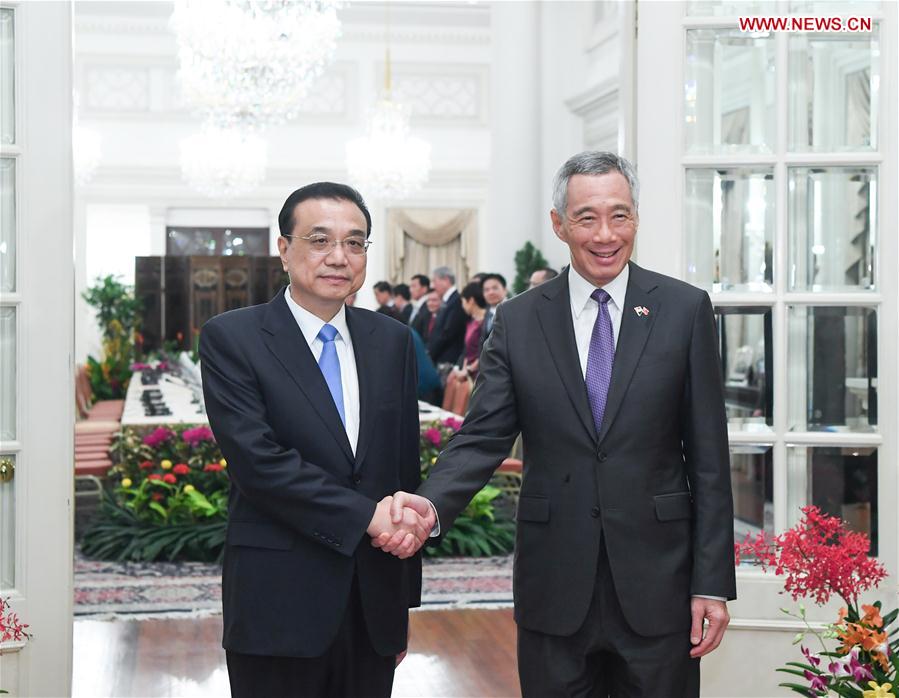 During their talks late Monday, Li and Singaporean Prime Minister Lee Hsien Loong witnessed the signing of a series of agreements on bilateral cooperation, including an upgrade of free trade agreement (FTA), with both sides pledging to push for progress on key regional issues.

On the FTA upgrade, Li voiced his hope that the two sides will seize the opportunity to bring bilateral trade and investment to higher levels.

The upgrade of the FTA will bring real benefits to the people and companies of both countries and send a strong signal of further expanding trade and investment, Lee said.

The two sides also pledged to advance the building of a new land-sea transport corridor, which consists of a number of railway and sea trade routes, connecting central and southwest China to Southeast Asia.

With the signing of a memorandum of understanding on the new logistics corridor, China and Singapore should build up the momentum and further boost connectivity, Li said.

The Singaporean leader said his country will join hands with China to build the new corridor so as to facilitate transport and trade between the two sides.

Experts say the corridor will help China further open up to the world while opening a shortcut for Southeast Asian countries to enter the Chinese market.

Another substantial outcome of the visit, Li said, is that China and Singapore have lifted the Sino-Singapore Guangzhou Knowledge City, an iconic bilateral cooperation program, to a national-level project.

In their talks, the Chinese premier said the two sides should actively expand cooperation in smart-city building, promote the upgrading of city management and artificial intelligence development, and mull new local-level collaboration.

Lee said the Singaporean side is glad to see the upgrade of the project, and ready to step up smart-city cooperation with China.

Intergovernmental cooperation projects between China and Singapore, such as the Suzhou Industrial Park and the Tianjin Eco-City, have yielded fruitful results. The upgrade of the Guangzhou Knowledge City project is expected to inject fresh momentum into bilateral practical cooperation.

Li recalled that China and Singapore established an all-round cooperative partnership progressing with the times when Chinese President Xi Jinping paid a state visit to the Southeast Asian country in 2015.

"China is willing to strengthen communication and coordination with the Singaporean side, deepen mutually beneficial cooperation, and continuously bring bilateral ties to higher levels," Li said.

During the talks, Li stressed China's support for the economic integration of East Asia and the centrality of the Association of Southeast Asian Nations (ASEAN) in regional cooperation.

Li called on all relevant sides to engage in talks on the basis of mutual respect and understanding to clinch the Regional Comprehensive Economic Partnership (RCEP), a trade deal that, once agreed upon, could cover half the world's population.

The RCEP is of great importance to preserving free trade and economic globalization, in which the World Trade Organization plays a central role, Li said.

Lee said talks on the RCEP have seen some major breakthroughs this year and have entered the final stage. He hopes the deal can be reached as soon as possible to send a positive signal on promoting multilateralism and free trade.

Li also expressed China's willingness to work with regional countries to facilitate talks on the Code of Conduct (COC) in the South China Sea to ensure peace and stability.

It is the first official visit to Singapore by a Chinese premier in 11 years. Li will also attend the 21st leaders' meeting between China and the ASEAN and the 21st ASEAN-China, Japan and South Korea leaders' meeting, respectively known as 10+1 and 10+3, as well as the 13th East Asia Summit.