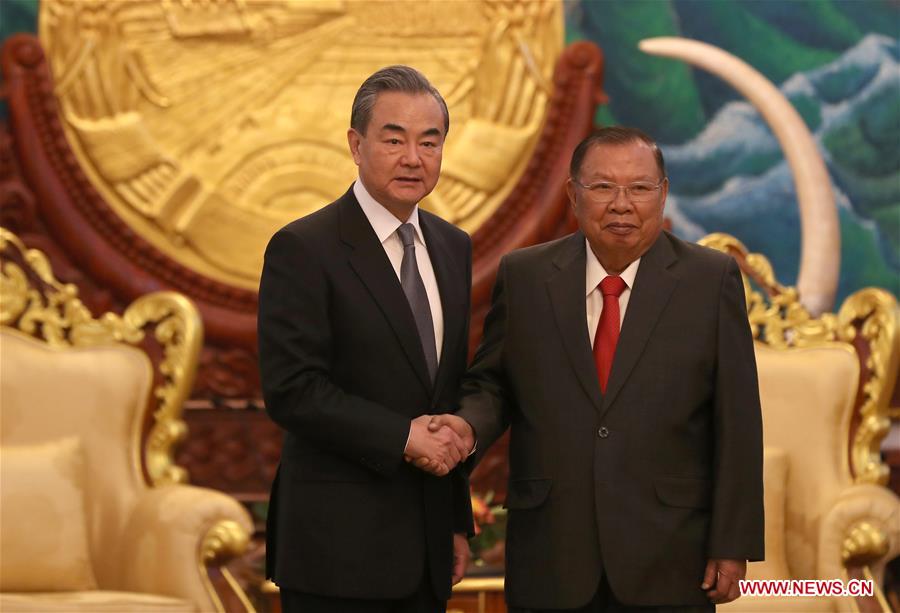 While meeting with visiting Chinese State Councilor and Foreign Minister Wang Yi, Laotian President Bounnhang Vorachit, who is also general secretary of the Central Committee of the Lao People's Revolutionary Party, said the relations between the two countries and the two parties are currently at their best levels. Exchanges at various levels and from different sectors have been frequent and close between the two sides.

Bounnhang said he is willing to attend the second Belt and Road Forum for International Cooperation to be held in China next year.

The Lao leader also expressed gratitude for the generous assistance that China has granted for Laos, saying the Lao side highly values the building of the China-Laos railway and more Chinese enterprises are welcome to invest in Laos.

For his part, Wang said China and Laos have been keeping frequent exchanges of visits and strategic communication at the highest level, providing important guidance for the development of relations between the two countries and the two parties.

He said the year 2019 will mark the 10th anniversary of developing the China-Laos comprehensive strategic partnership of cooperation. China will make joint efforts with Laos to implement the important consensus reached between the leaders of the two countries and comprehensively carry forward bilateral cooperation in all fields.

Wang said China would like to further strengthen high-level exchanges with the Lao side, make long-term planning for the development of relations between the two countries and two parties.

He noted that the China-Laos economic corridor is a landmark project for the two sides to jointly implement the Belt and Road Initiative, and he hoped the two sides will reach an agreement on a cooperation plan in this regard at an early date.

China and Laos will jointly organize the year of tourism next year, and Wang wished it a success so as to further enhance mutual understanding and friendship between the two peoples.

In his meeting with Wang, Lao Prime minister Thongloun Sisoulith said Laos and China have enjoyed unique and sound bilateral relations with the consolidated basis of political mutual trust.

Laos is ready to work together with China to plan and implement the agenda of important bilateral exchanges for next year and deepen the pragmatic cooperation in all sectors, the prime minister said.

Noting Laos and China are now communicating and coordinating on an action plan to build a community of shared future with strategic significance between the two countries, Thongloun believed the two sides will work out the action plan at an early date to chart out the future direction for the further development of the comprehensive strategic cooperative partnership between the two countries.

China is willing to join hands with Laos to implement the consensus reached between the leaders of the two countries, carry out closer high-level exchanges and advance all-round cooperation, he said.

China supports Laos' efforts in promoting economic and social development and is willing to make better connection between China's Belt and Road Initiative and Laos' development strategy of turning itself from a "land-locked" country into a "land-linked" country, he said.

China hopes that the two countries will reach an agreement on the cooperation plan of building the China-Laos economic corridor at an early date so as to boost Laos' capacity of self-driven development, focus on building the China-Laos railway and push forward the construction of economic belts along the railway so as to yield more substantial fruits from the pragmatic cooperation between the two sides, Wang added.