Since 2020, the outbreak of the coronavirus has posed great challenges to the health of people around the world and the global economy and trade. When the virus was spreading in China, the royal family, the government and people of Thailand donated materials to Wuhan and other affected areas through various channels. Recently, when China has made substantive progress in the control and prevention of the epidemic, however, the situation in Thailand deeply worries all of us.

On March 19, 2020, the Ministry of Public Health of Thailand said in the regular briefing that Thailand has increased 60 confirmed cases the same day. Up to now, 272 cases were confirmed in Thailand, among which 1 case died, more than 40 cases were cured and over 200 cases stayed in the hospital for treatment. Confirmed cases in Bangkok have accounted for about 80% of the total.

The expression of “China and Thailand will always be a family” is a portrayal of the close relationships between China and Thailand, as well as the two peoples. As an old Chinese saying goes, “you throw a peach to me, I give you a white jade for friendship.” When our relatives are in trouble, we should give a helping hand, just like the Thai government and people did for the Chinese people. China-ASEAN Panorama Magazine Agency would repay Chines people’s deep friendship towards the Thai people through donation and the letter to Your Excellency Deputy Prime Minister.

At the end of the letter, Gao Hang sincerely hoped that the anti-epidemic materials donated by China-ASEAN Panorama Magazine Agency could contribute to Thailand’s fight against the epidemic.

As an international media for multi-field cooperation between China and ASEAN, China-ASEAN Panorama Magazine Agency has been supported and helped by ASEAN governments and all sectors of society including Thailand since its establishment. From 2015 to 2016, China-ASEAN Panorama Magazine Agency established overseas branches with TCITV and Songjiang Media in Malaysia and Thailand, respectively, published China-ASEAN Business magazine in Malaysia and TAP in Thailand, making positive contributions to the promotion of China-ASEAN economic and trade, culture and tourism, and other fields of cooperation. 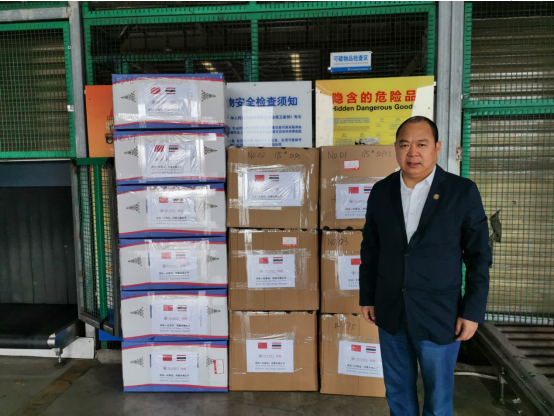